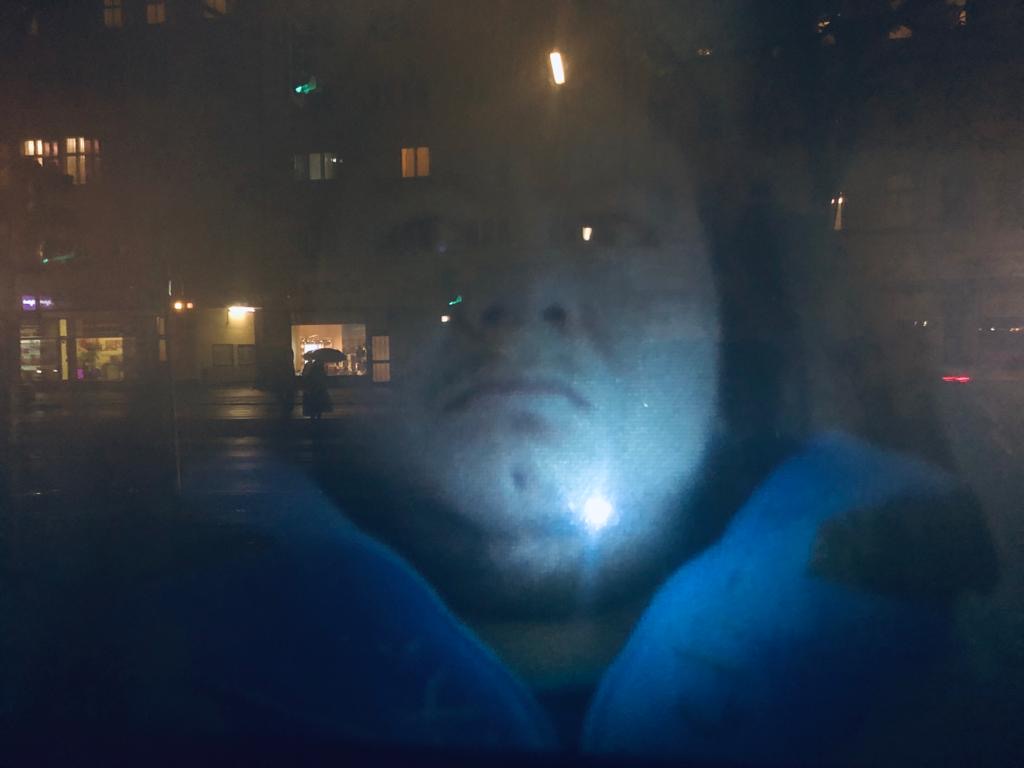 a face on a stretched out hand

Notes on the experience:

What are the stories these walls tell? The small projector held close to my body, sending a beam out from the stomach, a translucent orb of expectation. Out of place perhaps, the pale blue light picking out the folds and cracks in the broken surface, a reflected window. It blurred and then blurred again. The chalk was a wet powdery paste pushed along the wall, my fingertips dry, turning inwards. Could it follow my breathing?

This portable hand held projector, the same one which was used in Ioannina, to lead a procession backwards through the streets, landing on an empty space where 75 years earlier a jewish family had been evicted. It was connected to a power bank now, whirring and taped together, spitting against the light rain. In dialogue. Adi’s fingers twisted through the images, stepping forwards and then back from the embroidered lines of the artist Małgorzata Mirga-Tas’s translucent images. Memory is embodied, both trauma and resilience are inherited. On view, pressed against this emptying square in Wedding, are a series of patchwork fabric screens Romani Kali Daj [Roma Madonna, 2019/20], which portray figures, such as Mirga-Tas’ grandmother and mother, both of whom survived World War II and transcended traditional gender roles. Would they feel safe here?

Late November 2020, it was cold enough for the double layered strategy. We were resisting something then. Glasses steaming up under the damp face mask. Orange street light picking out the squat figures of people pushing home, their minds in the next moment. Were we welcome here? We were strangers in this space – does that make this an imposition? Did it always have to feel like a fight? A bracing on the inside, measured openness without, like standing in that tiled kitchen, with the pickling jugs just out of reach.

An open space, designed with trees and circular seating, in its centre a fountain on whose cone four life-size bronze figures dance. An ill thought out design. I let the image swing up  its side, then a hand joined! the image curled around the fingers, a face on a stretched out hand. It was a man, he had jumped up into the projected light and was moving back and forth. I was as surprised as he was. Light rain was falling. It was two days until the end of the Berlin Biennale and we were exhausted.

What are the stories these walls tell? They heave up and down with their own heavy grey  breath, tinged with a yellow nicotine. Held for a moment too long. There is a conversation already taking place here, are we intruding on a tired dinner party between the dusty Spati, the two donar shops and the cardboard cutout of the new hipster cafe on the far left.

Are there already traces of past events here?  This square emerging from the underpass of Wedding Sbahn station was named after a former captain of a Dutch slave ship, Joachim Nettlebeck. Actually it is a pattern, much of the street names in Wedding bear the legacy of the colonial imagination. Europe – Guinea – Suriname – Europe. Is this enough, and what more? How is it to add other voices to this dinner party? The voices of Roma women – erased, the voices of an indigenous Guatemalan grandmother – erased sit for a moment in this space also, and what other voices are a little too faint for the light particles to pick up on?

The blue flickering images step through the door of the ringbahn S41 towards Gesundbrunnen now. Nervous at first, they try out different locations for a comfortable seat, the door gives an interesting affect…but maybe that isn’t the point. Lifted onto the ceiling they look down meeting the eyes of passengers, this feels exciting. There are some whispers and comments, the images flick from left to right and rock with the motion of the train. Edgar Calal explained that for him the works represented a spiritual mission, an anti – colonial struggle and a journey to reconnect with ancestral healing. In this sense the works of art were alive, pulling the viewer and the artist on a journey across borders, categories and timeframes. The train moved forward out of Wedding and into the business district. Was it liberating for a moment not to bear the burden of the institutional context- a curated frame? Or did that allow the voice to relax, a microphone to ease the tension on the vocal cords.

What is left after a dialogue finishes? are there remains? bruised fingers squeezed under the table, crumbs left around the mouth. Perhaps there is a change in the air, has the temperature shifted? are the curtains left swinging, the visible signs of an invisible movement. Under the bridge it was dry, here the chalk could leave a mark on the wall.  The projector was simple, irrevocably set to flick through the slides, a few seconds each was all the attention we could spare. I could breath in this rhythm. With the light filtering out from her stomach Adi moved from right to left, and my hand followed. Physical traces of light, small marks of a child’s interpretation of the conversation.

Special thanks to Adi Liraz and Alexia Manzano, together with whom I conceptualised the mediation experience Inside Out for the Berlin Biennale.